All the tubes have been completed and they are off in the mail!

In total I did over 90 tubes and double that in knots!

If you’ve got a braiding project that’s not a whip, feel free to contact me and we’ll see if I can help you!

I was passing through Pendleton, OR and stopped at Hamley’s to look at the braided rawhide.

If you are in Pendleton you should stop by Hamely’s!

The hard thing about braiding over metal rods is that when you pull on the strands there is no give like whip braiding a whip.  Each pull on a whip the insides compress giving you a slow stop to your pull.  On  a metal rod the pull just stops and whenever I plait over metal rods the next day I feel it in my elbows.

Braiding over a metal rod is also challenging because you have to put the rod somewhere.  It can’t just dangle, it sticks out, which give you some strange body positions when you braid!

I came across this on the interwebs the other day:

You can view it online at: http://www.ask.com/answers/248618201/i-m-thinking-of-making-a-bullwhip-will-that-be-hard-right-now-i-m-looking-to-see-if-the-home-depot-has-everthing-that-i-need?qsrc=14106

There are several reasons why I cringe whenever I see things like this.  The main one is that it’s two misinformed people trying to give advice to someone that’s not really smart.  That can lead to someone ending up with a bad impression of sport whip cracking or worse an injury.  An improperly made whip will require you to “dishrag” the whip to get it to crack (like snapping a towel) however by using that technique you are cracking the whip in probably the most dangerous way a beginner can do it!

Now let’s get to why I believe the person asking the question is a couple strands short a 12 plait.  They are at the actively at the Home Depot looking for supplies when they asked for advice.  Was the question asker going to  hang out at the hardware store until someone replied?  That’s not a person who has done a bit o research (or any) to see what the might need.

As for the two people that put in answers the first is probably the smartest of the lot, but still in my opinion not a Mensa candidate.  The only decent advice is when the first guy warns about eye protection.  Both people answering the question mention leather.  The person asking the question is at the Home Depot  which is a hardware store, so unless that person is completely dumb (and would have no business with a bullwhip because they don’t make good decisions), they at the wrong store for the materials they need, this guy is trying to make a nylon whip.

Also why would the person asking the question simply throw “how to make a bullwhip” into the Google?  I just did that and a bunch of good information popped up.  Instead they went to ask.com where I’m sure a ton a whip makers hang out waiting to answer whip making questions.   Personally a better option to get an opinion would be to a leather, whip or braiding forum.

Now for the Bullwhips.org challenge of the day.  Here is a video made from the bullwhip page on wikipedia, it’s the whole article read by a computer, I think this is for people that are way to lazy to read.  I personally dare you to make it through the whole thing (almost 10 minutes!):

Yesterday I had an  order come in for a Make Your Own Stock Whip Kit. This kit takes you step by step into making a stock whip and comes with all the precut leather to do that as well as a DVD that takes you through the braiding and how to assemble everything.

This kit is designed for someone who wants to try to learn how to make a whip without all the trial and error that will go into your first whip.  Now most people in the USA want to make a bullwhip, so why don’t I make a bullwhip kit?  Well the simple answer is that a stock whip is much easier to make than an bullwhip and is a great gateway to a more complex project like a bullwhip.  However once you have basic plaiting skills and are ready to try a  harder project I do offer an ebook I wrote called  Bullwhip Making for the Beginner.

Since I was out of these Make Your Own Stock Whip Kits when the order came in I cut out several of these sets and have a couple of the kits ready to go.  If you’ve thought about trying to make a whip now’s a good time to try.

Last night I cut out the overlay for the 12 foot Indy Bullwhip that I’m currently working on.

A bit later today I’ll start doing all the strand prep:  Stretching, paring, stretching and splitting.  I should have time today to also get started on braiding the overly.

Speaking of braiding, there are a couple of articles on David Morgan’s blog about braiding soap:

And for fun, here’s a picture of a kid cracking a bullwhip that I found on the internet: 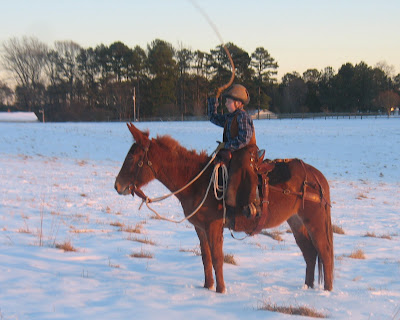 Also tomorrow  (2/13/10) I’ll be in Ellensburg, WA  helping my buddy Bink out with a whip cracking demo…if the weather is nice.  For more info visit: http://www.ellensburgcowboygathering.com/work_shops.php

Right now I’m on a little road trip with my family.  We are visiting Ghost Towns in Washington State.  It’s a fun little trip for the holiday weekend and with the economy how it is you can get nice hotels for dirt cheap!

We had lunch in a touristy Western Town called Winlock.  Just about every shop there was selling the cheap-o mexician swivel handle bullwhips.  I’ve never used one of them, and after seeing one my impression hasn’t changed.

If you end up getting one because of budget, availablity or whatever here’s a little tip…find some pecards!  All the ones that I saw were dry as a bone, so the Pecards leather dressing will give the whip a bit more of a fighting chance at life.

Also before I left home I managed to finish the overlay and attach the fall on the 10 foot bullwhip that I was working on.  I don’t like leaving partially finished braiding for long periods of time.  If a whip isn’t finished and it just sits there half braided the strands will untighten slowly over time.  Then you will end up with an inconsitant braid.

To fight that whenever I stop braiding (like at the end of the day, or to take a break), before I start again I undo at least a full cycle of the braid to make sure I a more consistant overly. Obviously the best way is to not stop at all while making the overlay, but that’s not always an option.