Yesterday I started work on two shot loaded whips, one bullwhip and one snake whip.  One thing about working with whips that have a short core is that they are very heavy on the hands while plaiting over them.  after plaiting over both bellies, my hands needed a  break!

Right now I’m using #9 lead shot, which is a bit bigger than the #12, but about 1/2 the cost.  When using finer shot you can pack more into the same space, giving a slightly heavier shotbag on your whip.  But honestly I don’t thing anyone would be able to tell the weight diffrence between a whip loaded with #9 and one with #12 without a digial scale.

Also with a slightly larger shot, if for some reason the shotbag ruptures inside the whip, there is less of a chance of the shot getting out (past the belly/boslter and overlay).  However if a whip is tightly plaited and correctly made, the lead shouldn’t be able to get out even if the shotbag breaks inside the whip.

Recently I ordered another whip bag from Joe Strain (Northern Whip Co).  I love the whip bags he makes, currently I have one in black and the one on its way to me is in burgandy. 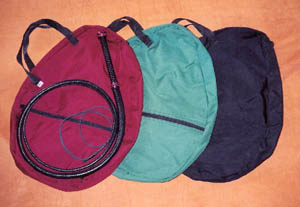 I need another bag to carry around the 29 foot 2 inch bullwhip, so that’s why I ordered another bag.  I think Joe sells the too cheap at $24.95, they are a steal!  If you have a whip and don’t have a whip bag, do yourself (and your bullwhip) a favor and get one of Joe Strain’s whipbags!

Last night I tied the knots on these two budget bullwhips and they are finished.  The first bullwhip is 5 feet long:

The bullwhip below is 7 feet long.

These two budget bullwhips are listed on my IN STOCK whips page.

Right now I have another budget bullwhip in the works (about 3 feet of the overlay finsihed).

On Monday I had my shipment of 25 pounds of lead shot arrive, so I may try to shot load my next budget whip…or make another budget snake whip.

Here are two budget bullwhips that I finished recently:

I tied both knots in the bullwhip above with two tone kangaroo strands.  I think adding the 2nd piece of kangaroo lace  really makes the knot look fancy.

I’m off now for a visit with the guy that prepares my taxes…I’m not looking foward to it!!

I’ve got another budget bullwhip almost finished, all it needs is the knots.  I’ve changed the design a little bit from the budget bullwhips I made a little while ago.  I’ve slimmed down the look handle.

One thing you might notice about the picture above is that the plaited belly is plaited the whole length of the handle.   I tried doing it with a yolk  like I normally would do with my nicer whips, but that gave the whip too slim of a handle.  Doing the plaited belly this way give me a nice handle thickness.

I threw this whip on my deck last night and it had a great crack.  I honestly think the plaited belly that I’m putting in these budget whips makes a huge difference in how they handle…compare to the other fillers that are in the mass produced crap that some “bullwhip makers” use.

I finished up the 16 plait signal whip that I was working on…it was a nice break from the budget bullwhips. It’s amazing how tightly you can braid them:

For the butt knot I added a natual tan strand of kangaroo for a little bit of contrast:

This signal whip is shipping off to New Orleans tomorrow.  I should have taken a close up picture of the cracker before I boxed up this whip it’s one of my best braided crackers so far.