Yesterday I got exactly three feet of the eight foot bullwhip I’m working on plaited:

Today I’m heading down to the Portland Oregon area to perform, so I probably won’t get any plaiting in today.   Tomorrow and Monday Robert Dante will be in Oregon and I’m bummed that I will miss him by a day…unless I can come up with a reason to stay over down there (hmmmm….).  I did make several efforts for a local whip group to bring him to the Seattle area but it didn’t work out.

This afternoon before my show I get to visit with a  pair of whips that I made (and their owner).

Here’s a bit of video of me presenting my “Crack Shot” routine at the Comedy Underground the other night.  This short bit is a part of my longer show.  Keep in mind before watching the clip below that this routine was written and designed for a comedy club audience, so if you are easily offended don’t watch it.

If you don’t know my full time job is as a professional magician. I do a lot of performing in Comedy Clubs and “one nighters”.   You’ll notice that the Crack Shot is something that is designed specifically for those venues.  While hopefully dialog looks very spontaneous, it’s in fact completely scripted…except for a few “planned ad libs”.

Basically what I consider a planned ad lib is when I have already written responses to things that might happen.  For example quite often while I”m aiming the bullwhip someone will yell out something, and I have a set plan for when that happens.

This particular routine has about 6 laughs per minute, or on average one laugh every 10 seconds.  That’s not including planned crowd reactions to where they “sponateously” do something like cheer or clap.   If you include those reactions you get about 8 responses per minute.  Which in my opinion is pretty good for using just the most basic bullwhip crack and a ton of personality.

Also you’ll notice that in the Crack Shot routine there’s no lame jokes.  If you watch many performers that don’t spend time writing you’ll notice they all use a lot the same jokes.  What separates the men from the boys is to be able to write you own scripts and come up with original dialog for you and your particular show or routine.

Now I’m not saying I”m the best bullwhip performer in the world (I’m not), but if you watch a lot of the videos on youtube of people performing with a bullwhip there’s not a lot of originality…however there are people that care about what they do and are doing very original stuff like Chris Camp or Robert Dante.

So I guess what I’m saying is that if you do any performing with your bullwhip, don’t steal other peoples material…Take the time to learn to write a joke, or write an interesting paragraph of dialog and learn to present it.  I know it’s hard work, but if you are going to perform at all you will need to treat your show or routine as a job and put work into it.

It’s a long hard road to put together something original and something that suits you, but it’s worth taking the long journey!

For the last two days I’ve been working on making a stockwhip handle.  It starts as a 12 plait at the keeper end and ends at a 24 plait at the butt end.  I’ve got the overlay finished and just need to tie the knots on the handle…oh then I need to do make the thong.

Right now I’m reading the book Absinthe and Flamethrowers,  this book has tutorials on how to do a lot of things.  This book has a chapter on how to crack a bullwhip and that chapter’s expert is Robert Dante.  The book leaves lots to be desired (not Dante’s fault), but it does teach the forward crack and covers safety.

On Saturday I got a couple of books called the Turkshead Cookbook vol 1 and 2. These books have methods for tying all sorts of turksheads using a special “Turkshead Tool”.  I’ve tied a few knots with it with string, and I’m going to do one with some roo lace soon.  Once I try using it a bit I’ll write a litte review of the book.  So far I thinks its a good way to learn to tie complex knots.

Here’s a press release that Robert Dante sent me:

Bullwhip artist Robert Dante brings the spirit of Indiana Jones to life on the steps of the Natural History Museum in London on Thursday, June 11.

Dressed as the whip-wielding archeologist, Dante will attempt to break his own Guinness World Record for “Most bullwhip cracks in one minute.” Afterward, he will give a bullwhip master class to journalists and appear on TV news programs and talk shows over the next few days.

Frank PR agency is flying Dante across the Atlantic on behalf of LucasArts and Activision to publicize “Indiana Jones and the Staff of Kings,” a new video game making its debut in Europe. The agency bills Dante as “the real Indiana Jones” because of his expertise with bullwhips, which feature prominently in the four Indiana Jones films.

Since 2003, Dante has set three Guinness World Records, with his most recent attempt in October 2008 resulting in 254 whip cracks in 60 seconds.

“I’m grateful for the chance to bring real whip cracking to the public,” Dante said. “Anyone can quickly learn to crack a bullwhip safely, from children to seniors. In the same way, the video game ‘Indiana Jones and the Staff of Kings’  can make someone feel just like Indy in an exciting adventure. I’ve seen a lot of whip cracking in video games, but this one comes closest to being the real thing.”

In addition to performing, Dante gives group and individual lessons on whip cracking and he is author of “Let’s Get Cracking!: The How-To Book of Bullwhip Skills

If you are in London and get a chance to watch Dante, let him know I say HI!  Dante’s a very nice guy and I hope he tops his record!

I’m back from Minnesota now and I had a great time!  I did five shows and a workshop for family entertainers.  While I was out there I had lunch with Guiness World Record holder Robert Dante.  Robert is the author of Let’s Get Crackin, a how to book of bullwhip cracking.

We talked about bullwhips, performers, and how much we love being performers.  I’ve never met Dante before and I don’t know why, but I thought he was going to be very arrogent, and he was just the opposite…a very nice person!

Dante gave me some tips and suggestions for some tricks I was working on and liked my “trick” shot idea of turning off a lamp.

Robert Dante sells a bullwhip package that has his book and a 5 foot 8 plait bullwhip the Victor Tella makes.  I picked up one of the Dante/Tella bullwhip packages.  I haven’t gotten a chance to really crack it…well I did give it a few throws in my hotel room (probably annoying my neighbors).

One change I made to the Tella bullwhip was that I changed thecracker that was on it.  I don’t know if it’s Dante’s or Victor’s cracker, but I thought it was too light and too short.  I put one of my polypro crackers on it and I think it handled much better.

Now that I’m back home I have a lot of work to get started on, I’m working on a mailing to fill up my summer performing schedule and I have to make a 6 foot snakewhip that’s going to Europe.  I still need to build up some stock of cheap/beginner’s bullwhips to take with me to a juggling convention at the end of the month.

A few weeks ago there was a “presale” of the book Let’s Get Cracking and I ordered one.  Mine hasn’t  arrived yet, but I’m excited to take a peek at it. 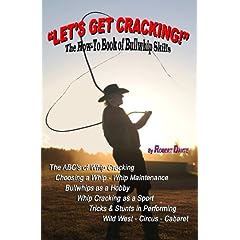 There aren’t many books on bullwhip technique in print, so I’m interested in Dante’s approach to teaching bullwhip cracking in print.

For more information about the book Let’s Get Cracking or to order a copy through Amazon.com click here!

When my copy arrives and I get a chance to read through it I will post a review.