Here’s a 4 foot 12 plait signal whip that I just shipped out:

Right now I’m working on a 12 plait signal whip that’ll be 4 feet long.  I’ve got about 18 inches of the overlay plaited and with a bit of luck I’ll find some time tomorrow to finish it.

I’ve been thinking of making a couple of signal whips when the order for this one came along…so that worked out well!

Well my mind is made up kip sucks for whipmaking!  For the first couple feet of the kip bullwhip that I was making it was doing alright, but once the strands started to taper and weren’t 8mm wide they were breaking like crazy.  I was breaking  a strand every 6-9 inches.

I wasn’t pulling very hard either (maybe 60% -70% of the pull that I’d use for kangaroo), and after fixing the strands about 6 times I’ve decided to cut off the overlay.  I don’t know what I’ll do with the bellies that are done…maybe I’ll cut out a kangaroo overlay and plait that over the kip bellies.

Anyway as far as my whipmaking goes, I’m not going to mess with kip for anything other than bolsters or 4 plait whip.

Yesterday I was cleaning up and found two kip bellies and a core that I had cut out a while ago.  So yesterday I plaited them and I’m making a 9 foot bullwhip. I also cut out the 12 plait overlay and sometime today I’ll probably do all the strand prep for it.

It’s been a while since I’ve made a 12 plait kip (or any cowhide) bullwhip.  There’s been a couple of whipmakers lately that have been saying that kangaroo is overpriced and kip is just as good.  Personally I disagree with that, and I think kangaroo is a superior material for making a whip.  Maybe making this bullwhip will change my impression of kip…but probably not.

The main advantage with kip is that it’s cheaper than kangaroo…but is it?  A side of kip about 17 square feet is about  $60-$80  depending on quality.  A roo hide is about 7 square feet and about $60-$80.  So you buy in cost is the same, but you get about twice as much leather from a side of kip.

Next you figure that when you trim a roohide you don’t trim off very much of the hide, just the ragged edges.  On a side of kip you end up cutting off most of the belly of the side of leather, the neck and any branding that might be on the hide.  You you are losing a couple of square feet of the side just in trimming!

Now you figure that a kangaroo hide is generally drum stuffed (meaning it has oils and dressing worked into the hide at the tannery) while a side of kip isn’t, so  you need to grease it yourself.  While greasing  a side of kip isn’t very hard or expensive, it does take a bit of time and adds an extra step to the preparation of the whip.  So you are losing money in time that it takes to grease the side of kip.

Kip is also thicker than kangaroo, so you’ll need to split down the strands of your whip if you want to use the stanard two bellies and two bolsters construction for your whip (or you’ll end up with a whip as thick as Hulk Hogan’s biceps).  You can skip the splitting if you are doing a whip that’s a lower plait count.  Also remember that splitting down also adds another step (and time) to the whipmaking process.

Everyone says that cowhide handles abrasion better than kangaroo, so you can use the whip on concrete.  Some cowhide handles abrasion better (like latigo) but kip doesn’t.  Kip will last a bit longer on concrete than kangaroo because it’s thicker, not  because of any special property of the leather.  I use a 4 foot kangaroo bullwhip on concrete all the time when performing at festivals and fairs and I’ve had it for 5 or 6 years.  I use this whip on concrete because I have to, I don’t like to use it on concrete, but it’s either that or cut out 10 minutes from my show.  As a general rule you shouldn’t crack any whip over concrete or abrasive surfaces…no matter what it’s made out of!!  I can’t think of any reputable whipmaker that would  encourage you to use their whip on concrete.

Finally some people say that kip is as strong as kangaroo…I strongly disagree with that!  There’s a reson that Chris Barr chose to use kangaroo for his 72 plait award winning stock whip! 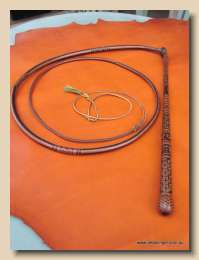 There’s also a reason you don’t see 24 pait whips made in kip. You can’t get strong, fine strands out of kip.

So at this point you might be asking me why I’m making a 12 plait kip bullwhip?  I’m hoping that making it will change my mind or opinion of using kip.

My buddie and fellow whipmaker Steve Huntress is hiking some of the Applachian Trail to raise money for Cancer research.  If you donate $25 or more he’ll put your name in a drawing to win a whip.

For more info and to donate visit http://neawhips.com/hikeforcancer.aspx

Steve makes great nylon whips, I have a pair of 6 foot 12 plait nylon whips that he made for me.

I gave it a few test throws on my deck and it’s not cracking quite right.  I’m going to take a few inches off the fall to see if that fixed the problem.   If that doesn’t then I may have to try either adding weight to the handle of shortening the thong a bit.

I still need to add a knot at the keeper on the thong and shellac this whip.

After trying out some of the knots in the Turkshead Cookbook with kangaroo, I have some opinions about the book and tool.  These might change after doing more knots with it.

This book has tons and tons of turkshead knots and it’s a great resource to have around.

The main thing for me is that it’s hard to guage how thick the kangaroo lace should be when tying the knot on the tool and not directly to the whip.  I was making them too wide or too thin strands.  When tying directly to the whip you know pretty early if the lace is the right size. With the tool you have to tie the knot, then move it to the whip and tighten it before you know how well it’s going to fit.

I did do all my experimenting with knots that were new to me, and I’m sure that if I did knots that I knew how to tie the outcome would have been better…but since the knots that I already know I can do from memory I don’t need the tool for those (that’s why we didn’t try it with those knots).

I think my plan of actions with the Knot Tool and Turkshead Cookbook will be to learn one or two new knots with the Turkshead Tool and keep practicing them with the tool…and eventually work them out to memory (or semi memory) so that I can tie them directly to the bullwhip.

I also just ordered Introduction to Turksheads by Tom Hill.  In case you haven’t notices I’m working right now to improve my turksheads and my turkshead vocabulary.

Today I only have one morning show, so I’ll probably get a chance to make a stockwhip thong for my handle.   I still need to take a picture of the stockwhip handle.  I’ll probably do that after I shellac it.

For the last two days I’ve been working on making a stockwhip handle.  It starts as a 12 plait at the keeper end and ends at a 24 plait at the butt end.  I’ve got the overlay finished and just need to tie the knots on the handle…oh then I need to do make the thong.

Right now I’m reading the book Absinthe and Flamethrowers,  this book has tutorials on how to do a lot of things.  This book has a chapter on how to crack a bullwhip and that chapter’s expert is Robert Dante.  The book leaves lots to be desired (not Dante’s fault), but it does teach the forward crack and covers safety.

On Saturday I got a couple of books called the Turkshead Cookbook vol 1 and 2. These books have methods for tying all sorts of turksheads using a special “Turkshead Tool”.  I’ve tied a few knots with it with string, and I’m going to do one with some roo lace soon.  Once I try using it a bit I’ll write a litte review of the book.  So far I thinks its a good way to learn to tie complex knots.

I just got three kangaroo skins in the mail from Paul Nolan.

This is the first bullwhip I’ve made in a while that I’m not proud of…it’s not a bad whip, but I’m not going to enter it into any contest either.  I did take it out and it cracks fine…so at least it’s got one thing going for it (the most important thing!).

This was my first attempt at a 20 plait bullwhip, so I’m not surprised that it’s not the prettiest thing ever.  I learned a lot making it, and the next one I do will look a lot cleaner.

I don’t know what happened with the seam, it should have been straighter…

The edge of the white kangaroo makes it look like there are gaps in the plaiting on the handle (there aren’t).  If I ever use white roo again, I’m going to pare both flesh sides so that I don’t have that problem.

I made the patterns by drawing them on a piece of paper, then tried to recreate it while plaiting.  Next time I’m going to write out the strands path, that way I’ll have all the thinking done before I get to the plaiting and things will be easier to follow.

When all is said and done with this whip, it’s not a horrible first try at a 20 plait whip…or 3rd try at doing plaited designs on a handle.

I think I’m going to list this bullwhip on ebay and see what it sells for.  It’s something that’d be hard to price because a 20 plait is a lot of work and I put a lot of time into it (compared to a 12 plait), but it’s not worth what I should be charging for it.

Now to redeem myself, here’s another whip that I finished a few days ago, but didn’t shellac until today:

This bullwhip is 12 plait in black roo